In Germany, where flooding has affected the regions of North Rhine-Westphalia and Rhineland Palatinate in particular, more than 150 people have been reported dead, news agency Deutsche Welle reported Monday.

German Meteorological Service stated on Twitter that “with global warming, weather extremes are becoming more violent and arguably more frequent.” It added that the extreme weather in Germany was part of a trend, “even if one has to check in each individual case whether and, if so, what part of climate change has already played a part.” 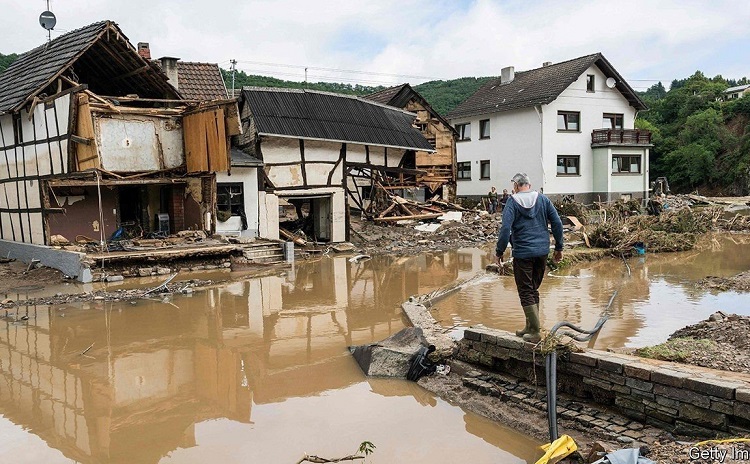 “Germany is a strong country,” Merkel said in comments reported by DW. “We will stand up to this force of nature, in the short term, but also in the medium and long term … We have to hurry up, we have to speed up the fight against climate change.”

“This event was really unprecedented in a lot of ways. We’ve heard from a lot of the local meteorological agencies in Germany and other parts of western and central Europe where the level of rainfall that we saw within a matter of 24-48 hours was beyond what many of them have ever recorded.” Said Steve Bowen, managing director and head of catastrophe insight and impact forecasting at Aon.

It is now crucial to identify areas at risk, Bowen said, and “in terms of infrastructure investment and early warning detection, to make sure people are aware that these large events are on the way and what they need to be doing very quickly to seek safety.”  This is a “global problem,” he added.

Assessing the economic and political impact of the floods with September’s federal election just two months away, Carsten Brzeski, global head of Macro at ING, said “it will still take some time to fully measure the full impact of the devastating floods.”

“Often, the impact on the total economy stands in no comparison with the human suffering,” he said in a note on Monday, but stressed: “in Germany, it would not be the first time that a natural disaster becomes a political game-changer.”

“With only two more months to go until the federal elections, such natural disasters can have a crucial and trend-setting impact, both in terms of personal appearances for the leading candidates as well as for the hot topics for the final months of the campaign,” he noted.