Netflix NW-2-5 error is a message that is given on TV screens. This informs about a network connectivity issue to the users. The meaning of this is that there is a particular problem that does not allow the users’ devices to reach the movie streaming service. However, in the majority of the devices, the error typically occurs. The devices are, for example:

Howsoever, the skills of the users are required to solve these problems. It is suggested to the users to review the tutorial on how to fix the Netflix NW-2-5 error. 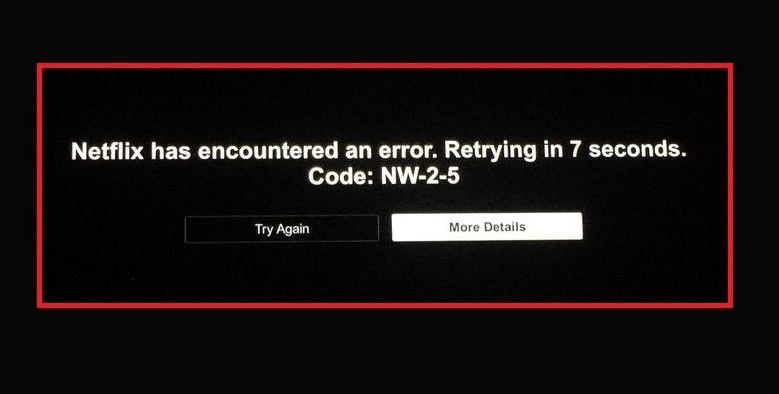 In most cases, the users say that they cannot manage to reach the particular app service, which is needed. Most often, the NW-2-5 issue appears after the users have updated Netflix. Additionally, they get a notification of not getting connected to Netflix. The users are requested to try again or restart their home network and a streaming device.

How to Fix Netflix NW-2-5 Error

The users try their level best to simply remove the error. However, the users start looking for a solution online when their trial fails to perform successfully. Some of the confirmed methods are mentioned below. This will help the users to fix Netflix NW-2-5 on Smart TVs as well as on any other devices.

Due to a block set up on the Wi-Fi network, the users might be facing Error Code NW-2-5. This is one of the most important reasons for the occurrence of this error. This might happen if the users are using Wi-Fi at work, school, or universities. However, a finite bandwidth is present in public internet networks. This should be kept in mind. This means that slow performance results in a low-quality connection between the users’ devices and Netflix servers.

However, if the users do not use public Wi-Fi networks and still face problems, they have a solution. If they face similar problems while using cellular data or satellite internet, they should change the network. Switching to cable internet or DSL is one of the best ideas. This will result in better connection quality as well as speed.

The users must run a network connection test. This will help them to ensure whether the internet connection is OK or not. These can be found online. The search phrase is needed for Google only. However, it is suggested to use the Fast Speed Test by Netflix. This will check the users’ connection to their own servers.

Firstly, the users have to shut down their TV with the help of a remote. Then the plug is removed from power immediately. The users are requested to not rush to plug it back on. They need to hold on for at least one minute.

Then the time comes to plug the device back in. After that, with the help of a remote, the TV is turned on. The users need to check the Netflix app. They must see whether the method has worked or not.

Doing this method is much more difficult. Howsoever, the users at first need to turn off their TV and then unplug it. After this, the users must disconnect their modern as well as a wireless router.

After doing this, the users must wait for at least a minute patiently. Then they need to plug all the wires. Additionally, they must look at their modem or router carefully.

The users must wait patiently unless all the lights appear on it. It signifies that the network is ready for use. After this, the users can turn their TV on with the help of remote. Additionally, they can binge on those good Netflix series that they are willing to watch.

A Wi-Fi router is always attached to the modem. This can be an issue that is causing this type of error to appear. Just right after the reboot of the network, the users need to try this method. This method allows for identifying wireless or router connectivity issues. If the users succeed, then they will understand that the router is the main problem.

However, it is suggested to get in touch with people who set up the home network for them if they face any problem-solving on their own. Additionally, the settings of the router need to be configured properly. This will help the users not to face the Netflix NW-2-5 problem once again.

Step 1: First of all, users need to turn off their smart TV. However, they can just unplug the TV cable if they wish to.

Step 2: Then connect the smart TV with the modem. A cable known as Ethernet is used for this purpose.

Step 3: After that, the users need to unplug the modem for approximately half a minute. Again plug it. The users must patiently wait until all the lights are back on.

Step 4: Lastly, turn on the TV. Open Netflix. They can now watch their favorite series on the Netflix app without facing any problem.

The quality of the Internet signal can also be detected. These methods will help users if they face any problem.

However, if these devices are placed near to the router, then they must be moved away from it. The chance of signal interference can be lowered with the help of this method. This is one kind of measure that must be taken by the users.

However, if the signal is still low, the users must continue moving the router. The users just need to understand that the signal reach of the router is limited. This means that the bandwidth is limited. The users should not place it too far away from the required device. The devices that require this router are computer or Smart TV. These devices are the ones where they watch Netflix series. If the router is placed near these devices, then the connectivity will be good as well.

There is a final tip for the users to strengthen the Wi-Fi. The router is placed in a higher position. It can be placed on a shelf or the top of the cabinets. These are all present in the rooms of the users. A better signal will be accessed than when being put somewhere on the floor. This step will help the users increase the connectivity to watch their favorite series in the Netflix app. This will also prevent the occurrence of errors.

How to Fix Netflix NW-2-5 Error in Xbox One 360, PlayStation, Roku, Blu-Ray Player, and Others

The users must follow the above-mentioned steps if the error prevents the users from accessing Netflix on devices like gaming consoles. The Gaming consoles include:

However, users can also utilize another method.

The device that they are having issues with must be connected with the modem. Additionally, users can configure their device’s DNS settings.

These are various ways to fix Netflix NW-2-5 error. The users can use these methods according to the error that has been taken place. The errors might take place due to the connectivity problem of the router and many more. These will help to fix errors. Lastly, the users can watch their favorite Netflix series without any problem if they are successful in fixing these errors.