In Windows 10, Start Menu is the main access point to all your installed applications, and It’s pretty frustrating if Windows 10 Start Menu is not working. It is the small button on the left corner of the taskbar Windows, which is used to allow users to browse to other locations. It can be accessed in two ways;

As start menu is the main port of call for navigation or access point in Windows 10. However, when it plays up, it becomes a huge problem.

If we talk about Windows 10, it is officially out today. It’s the most significant update by Microsoft to Windows in many years and represents a new direction for premier software products. Its turn as the best replacement for Windows 8 and 8.1, and also attract users of Windows 7 who never bothered to update to Windows 8. 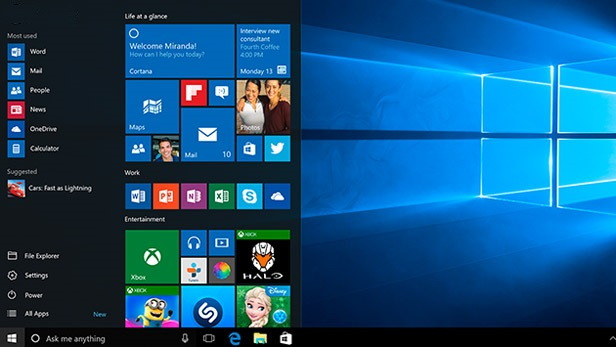 But all these are not enough people are facing so many problems with Start Menu and restarting the system did not help too.

There are lots of reasons why the Windows 10 start menu is not working. But most commonly it happens when they are installed in the wrong way or they can be affected by third party software also be the problem. Most of the users either upgraded from earlier versions build to a newer Windows 10 build which seems pushed automatically.

However, Considering the updates and pushes, and applications (third party) in the Shell Context, these can also affect Start Menu and generate issues. There are so many ways to fix this problem. You can try these methods:

If you are not able to start the Windows 10 Startup Menu, then, first of all, you have to go back and update it one more time. The purpose of revert back the update is that Windows 10 run on your computer before the upgrade.

After doing this step, you have to check it and also check the activation of the Windows before restart your system. If there is a minor issue in the Windows application, then it will work fine.

This is the second method if your issue is still the same after updating Windows (After following method 1) In this method you have to repair the image of Windows 10. There are many ways to repair Windows images; some of them are:

In this method, you have to start the menu button open CMD (Open Command Prompt ) by simply pressing Win + X shortcut keys on your keyboard. Type “Dism/Online/Cleanup-Image/RestoreHealth” command and repair Windows 10 images.

In this method, we can also repair the image of Windows 10 in a straightforward way. You can repair Windows 10 images by using the SFC tool. In this method, you have to open CMD by the Windows button + R and enter the cmd or Win + X menu and choose Command Prompt (by Admin).

When you open command prompt enter SFC /Scannow and press Enter. The repair process of the image of Windows 10 will start. This process will take a while, and in the end, a Windows image will be repaired.

Taskbar Showing in Fullscreen in Windows 10

Method 3: Through an Elevated PowerShell

Before you start working with an issue, we strongly advise you to take a backup of those files you can’t afford to lose. Now what you need to do:

Step 1: Click on the task manager by right-clicking on the taskbar of your desktop at the bottom.

Step 2: Now come to the top of the Task Manager Windows, select file option and then choose Run new task

These commands will take some time for execution, and in the end, you would surely be able to open a working Start Menu.

Step 3: Finally, create new users by click on “Add someone else to this PC” easily. When a new user has been created than sign in with user account and use system as per admin right.

This tool has been released by Microsoft for Windows 10 that will troubleshoot and fix all your Windows 10 Start Menu problems & issues automatically. Sometimes startup menu in Windows 10 not working was one of the big issues with some users with a new OS system, but finally, Microsoft has decided to address this issue.

Basically, it is a utility tool if there is a corrupted Windows Resource protection File inside your Windows 10, you would have many difficulties in performing the SFC scan on your PC as some of the Windows functions of your system may not work as expected before you run SFC Scan.

Step 1: Press the Windows button to open the Start Menu.

Step 4: At least, wait some time, and then you are surely able to the startup menu.