On Saturday, 25 years after the accident that killed 230 passengers on TWA Flight 800 in 1996, the federal government will begin dismantling the reconstructed wreckage of the doomed plane. A special memorial service for the victims’ families will be held in advance of the destruction. 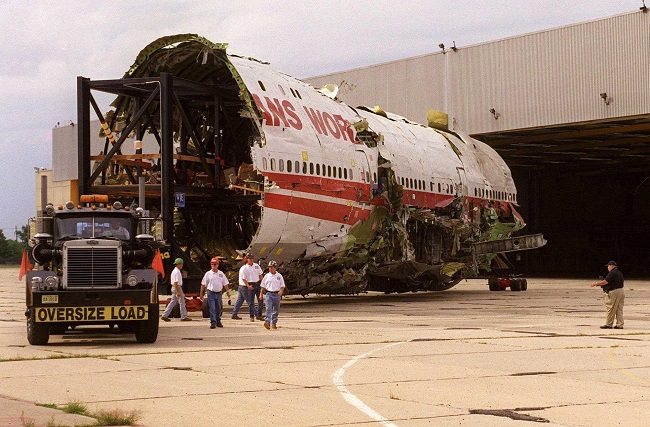 The memorial event will be held on Long Island, New York, more than 260 miles away from the 30,000-square-foot hangar of the National Transportation Safety Board’s training site in Ashburn, Virginia. The agency plans to decommission and burn the rescued debris in the coming months; up until last week, it has been used in accident investigation training courses.

All 230 people on board were killed when their jet exploded shortly after takeoff from New York’s John F. Kennedy International Airport on July 17, 1996. The plane crashed into the ocean not far from Long Island, New York.

More than 95% of the aircraft was retrieved with the help of the Navy and hired fishing trawlers searching the ocean floor, and after almost a year, the remains of all those who had perished were also located.

Although the source of the initial spark was never discovered, after four years of inquiry, Hilldrup’s team concluded that an electrical short likely caused the explosion by detonating vapours in the centre wing fuel tank.

However, some people who were close to the catastrophe claim that the NTSB’s proposal to destroy the recreated wreckage by removing and melting or shredding the almost 1,600 pieces won’t bring closure.

“This is something that will always remain open. In spite of your best efforts, you will never be able to completely hide it away “John Seaman, whose niece Michelle Becker perished in the tragedy, made this statement.

The incident sparked a wave of conspiracy theories and speculation that terrorists had shot down the airliner with a rocket, leading to one of the largest and most expensive aviation investigations in history.

The FBI has released 755 testimonies from eyewitnesses, and while they vary significantly, many of them describe seeing what they believed to be a flare or fireworks headed upward toward the jet just before it detonated. The terms “missile” and “rocket” were really used by a handful of the eyewitnesses.

According to Leon Panetta, who was chief of staff for President Bill Clinton at the time of the tragedy, even though the agency ultimately determined the explosion to be an accident and found no evidence of foul play, investigators had considered state-sponsored actors during their probe.

When asked about the downing of Pan Am Flight 103 over Scotland, he had previously claimed, “The investigation was looking at practically every possibility, including state actors, because we’d known that Libya had been involved with regards to bringing down the aeroplane over Scotland.” “Our attention was focused on Iraq and Saddam Hussein. We were considering the likelihood that Iran was involved as well.”

Bryson stated that families had been informed of the decommissioning prior to the agency’s public announcement, and NTSB stated that the original agreement with the families of those killed in the crash included a stipulation that the reconstruction would be used solely as a training tool and never as a public exhibit.