Andrea Dick, a fervent supporter of former President Donald Trump, believes that he was the victim of an election fraud, despite the fact that this claim has been thoroughly debunked. To say she doesn’t like President Joe Biden is an understatement. 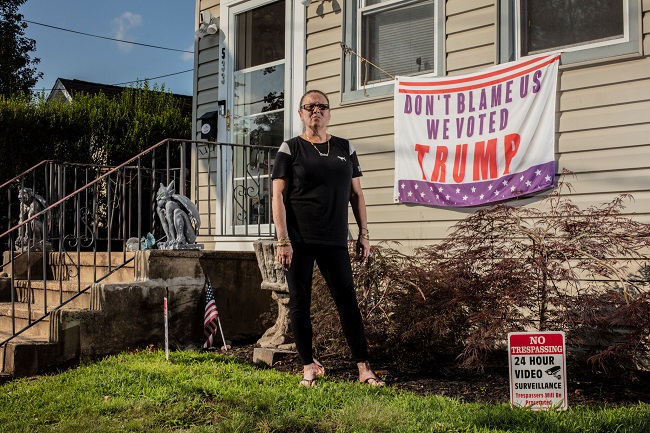 The frank slogans blaring from the banners outside her New Jersey home, such as “Don’t Blame Me/I Voted for Trump” and several others that crudely criticise Biden, make her opinions clear. Some of them contain a word that some find particularly offensive, but the Supreme Court ruled long ago that its use could not be restricted merely to appease those it offends.

She Challenge it in Court

Local officials requested that she remove a number of the banners because they allegedly broke an anti-obscene ordinance, but she refused. She is now refusing to comply with a judge’s order and threatening to challenge it in court on the grounds of free speech.

She declared in an interview on Monday that she would uphold her First Amendment rights.

Dick’s case is just the most recent of many such disputes to show how difficult it can be for local officials to strike a balance between defending free speech and addressing complaints about language that some locals find offensive in a nation where political fault lines are becoming more sharp and deep.

Despite buying the banners earlier this year, according to 54-year-old Dick, who lives with her mother in Roselle Park, she didn’t hang them on the house or the fence outside until Memorial Day.

“I must have gotten worked up over something,” she explained.

She claimed that shortly after the holiday weekend, she learned that some Roselle Park residents were upset about the language on the banners and the possibility that passing kids would see it. She noted that her home was close to a school.

No kids lived on the block, according to Dick, whose mother, Patricia Dilascio, is the owner of the home, and no kids typically walk by on their way to school.

However, the borough’s code enforcement officer was informed of several complaints about the banners by the town’s mayor, Joseph Signorello III, who then forwarded them. A 14,000-person town 125 miles east of Pottsville called Roselle Park cast a resoundingly pro-Biden ballot in November.

Democrat Signorello declared, “This has nothing to do with politics in any way.” He added that if the signs had used similar language to express opposition to Trump, officials would have taken the same actions. It has to do with decency.

Judy Mack, a Roselle Park code enforcement officer, visited the residence and issued Dilascio a citation for disobeying a borough-wide ban on the exhibition or display of pornographic material.

In her more than 12 years as Roselle Park’s code enforcement officer, Mack claimed that she had never used the ordinance. She added that despite the fact that Signorello had relayed the residents’ complaints to her, he had not given her any specific instructions.

I’m Only Carrying Out My Duties, Mack Said

According to Mack, Dick was given a few days to take down the banners. She was issued a summons to appear in court when she failed to do so.

Judge Gary A. Bundy of Roselle Park Municipal Court gave Dilascio, the owner of the property, a week to remove three of the ten signs posted on the property—the ones that contained the offensive word—or face $250 daily fines at that appearance last Thursday.

Given that Dick’s residence was close to a school, Bundy wrote in his decision, “There are alternative methods for the defendant to express her satisfaction or displeasure with certain political figures in the United States.”

It “exposes elementary-age children to that word, every day, as they pass by the residence,” he continued.