If a user of the Dell Laptops, there is a probability that one might come across this common issue at some point of time or the other with their laptops, i.e. Dell Laptop plugged in Not Charging. Well, it not necessary that this has to be the reason for the computer to behave this way. There might be some other things that lead to the charging problem in the Dell laptops, which can be fixed easily if one knows what’s to be done.

There can also be a problem where the laptop battery might be dead and hence can no longer charge the device, there can also be issues with the connector, as it can be broken, these seems logical enough and can happen to the newest of the devices, that has just come out of the box. The Dell laptops having the problem of plugged in not charging can also be a software issue. 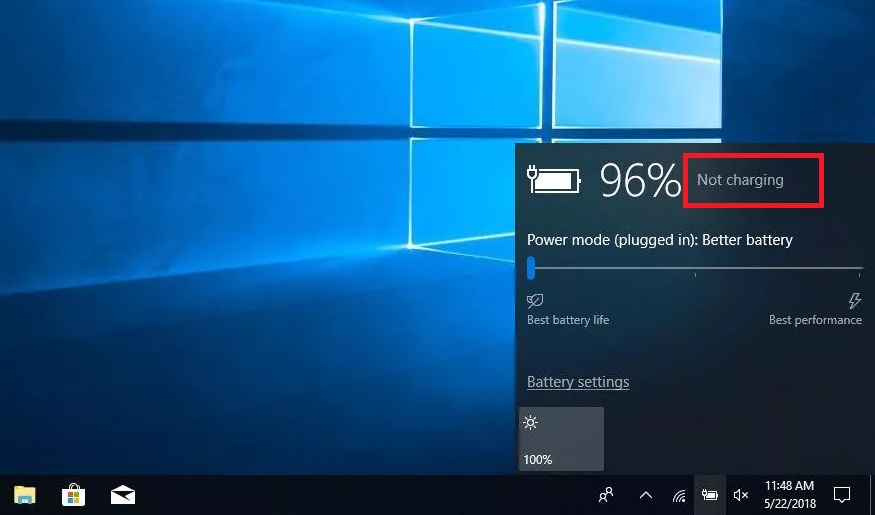 Software is as essential for a laptop to run smoothly as much as it needs to have the hardware. Most of the Dell laptops having the windows operating system, having the regular update cycle and drivers updated can cause the driver to be corrupt and misbehave, therefore it is recommended to check the software as well as the hardware sides which can be the possible cause of the issue, that comes out to be a common problem with all the Dell laptops. Numerous people have come across this common issue.

How to Fix Laptop Plugged in Not Charging

There are a total of 8 ways using which one can solve this issue of Plugged in Not Charging There are many possible problems responsible for the issue that will be discussed below and also the solutions to it.

The problem with Dell laptops plugged in not charging primarily seems to be a hardware issue, but other Dell users have been experiencing the same issue with the replacement of new hardware or hardware that works fine for them.

To overcome this issue, you need to check the charge limit. To do the same one need to go to BIOS and check if the charge limit set is not below 100%. The steps below provide the navigation to do the task systematically:

Step 2: Now, press the power button. As soon as it’s done one needs to keep pressing the F2 key immediately (or any updated key to enter the Dell BIOS) until the laptop enters the BIOS screen.

Step 3: Go to the power management in the BIOS menu and navigate to the primary battery charge configuration.

Step 4: Now, make sure that the selected option is a Standard Charge, and no custom limit like that of 95% is chosen which limits the battery charging after 95% or whatever percentage is chosen. Fixing the issue of Laptop plugged in Not Charging Error should be made if one is facing it.

Step 5: Finally, reboot the laptop after saving the updated settings and check if the laptop is charging when connected to AC power.

Method 2: Reinstall the Power Management Driver or the Battery Driver

Now, the thing to be done to restore this issue with the battery driver is to reinstall it and to do so; one needs to follow the below steps for a systematic and correct procedure:

Step 1: In the Dell laptops having windows operating system, open the device manager.

Step 2: Now in the device manager, go to Battery or any equivalent option in the system drivers and by a right-click on it select properties.

Step 4: For ease and re-installation of the latest drivers, one needs to make sure that the laptop is connected to the internet.

Step 5: Now, scan for the hardware changes in the device manager by clicking the magnifier like an icon or choosing the option from the menu.

Step 6: The device manager will identify the battery as newly found hardware that has not been initiated yet.

Step 7: Now, the latest battery or power management drivers must be installed in the system.

If the steps above are followed as instructed and the reason behind it is the battery driver, then the issue of laptop plugged in not charging should be fixed, and if not then there are several others methods to overcome this.

Taskbar Showing in Fullscreen in Windows 10

Method 3: Connect Your Laptop to Any Wall Power Outlet

If the Dell laptop has been connected to a power outlet that is connected via a stabiliser or UPS or an inverter, there is a probability that the power supply is the problem for Dell laptops plugged in not charging.

Commonly this takes place under the condition where the stabiliser is in a load and is unable to provide enough power to your charger to charge the laptop but enough only to keep it running. Same is the case with the UPS or the inverter. If the power requirements exceed the power output capacity of the UPS or inverter, the laptop will not charge just like lights being dim or fans spinning slowly.

The most straightforward fix of the problem can be attained by just connecting the power cable of the Dell laptop charger to any wall outlet directly. Now, after doing this if the fault of laptop plugged in not charging was because of the UPS or inverter or stabiliser then, by applying this method it must be fixed, unless, the house is getting a low voltage power.

The powers cords used are highly compatible across devices, and one can use it in place of the existing power cord of the DELL laptop charger.

If this fixes the Plugged in Not Charging issue of charging the laptop, then one can get a new power cord from any local electronics store or from an official dell spare parts shop or from a website to enjoy the hassle-free laptop experience.

If the software or the power cord was not the issue for the Dell laptop plugged in not charging, then it might be the charger brick that is causing the problem and thus is unable to charge the laptop properly.

As Dell laptops are used commonly by most of the individual one might get a charger from their friends, colleagues, classmates or family members. Trying using some other charger might solve the problem of the laptops plugged in not charging issue. Also, one can visit a store of electronic devices and check with the charger available at the store and if it resolves the use of charging, buy it.

If the Dell laptop one has been using have a removable battery, there is a probability of the battery been experiencing a bad contact point situation and nothing else. By saying that, now, one can easily remove the battery of the laptop and try it reconnecting correctly to its place.

To do so, the following steps are given:

Step 1: Shut down the Laptop.

Step 2: Turn the laptop over and disengage the locks that keep the battery stay at its place at the back.

Step 3: Now, remove the battery and clean its contact points as well as the place where it is kept thoroughly. Using liquids for the cleanup is not advisable as it might cause some other damage to the laptop, like short circuit and dysfunction of the other components present in the laptop.

Step 4: Replace the battery and push the locks into the locked state and start the machine, now, check if the problem of Dell laptop plugged in not charging issue has been solved.

If no result found by this method go for the next, mentioned below dealing with some other problem the laptop has been facing.

Dell laptops being trendy among the large number of people and country and use the same battery and battery slot design across a wide range of laptops; one can easily swap out their battery with that of the other laptop belonging to their known ones.

Step 1: Doing this the thing one should take care of the battery been swapped with the other battery works and does not possess the laptop plugged in not charging issue.

Step 2: Remove batteries from both the laptops and now try to charge them with their batteries interchanged.

Step 3: Now if the affected laptop charges correctly and the other laptop from which the battery has been taken and swapped with the affected one’s battery face the same issue as the previous one then this clearly indicates that the issue of laptop plugged in not charging is due to the battery dysfunction and must be replaced soon after.

And if both of the laptops been swapped with their batteries works fine without showing any dysfunction of laptop plugged in not charging then the problem is somewhere else.

Method 8: Go to the Service Center and Check the Mother Board

With utter regret, if after coming this far and the load of the problem laptop plugged in not charging is still bored by the laptop, it is highly probable that the Motherboard of the laptop or at least the charging station has gone wrong and needs a repair or replacement.

The problem of laptop plugged in not charging is a common issue with Dell laptop users. But with every problem comes its solution. Above are given some solutions to this problem depending upon the probable problems faced by the laptop one is using. Using these mentioned methods, one can easily cope with this issue.

Image to Text: How to Extract Text From A Picture

How Technology Can be Harmful to Your Health?

Everything You Need to Know About Online Gaming

5 Best Alternatives to Facebook That Your Must Try in 2021

72 Best Books to Read on the Internet for Free

5 Best Drawing Software for Drawing in 2021

How to Make Money Through Blogging in 2021

Developing a Software: Here’s Why Should You Go For MAC