Tropical cyclone Hurricane Katrina made landfall in the southeast of the United States in late August 2005.

More than 1,800 people died as a result of the hurricane and its aftermath, making it the most expensive natural disaster in American history. 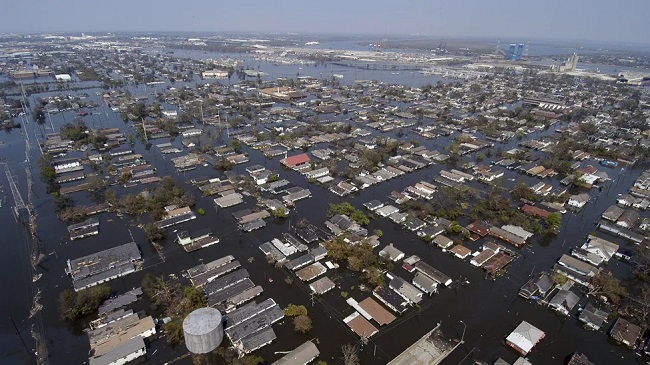 On August 23, 2005, a tropical depression that would later become Hurricane Katrina developed over the Bahamas, about 350 miles (560 km) east of Miami. The weather system strengthened over the course of the following two days, receiving the name Tropical Storm Katrina

. It made landfall in Florida between Miami and Fort Lauderdale as a category 1 hurricane, which is defined by the Saffir-Simpson scale as having winds between 74 and 95 miles (119 and 154 kilometres) per hour. The Florida peninsula experienced sustained winds of 70 miles per hour (115 km per hour), and some areas saw rainfall totals of 5 inches (13 cm). Less than eight hours were spent by the storm over land. When it got to the warm waters of the Gulf of Mexico, it quickly got stronger.

Federal officials initially thought that New Orleans had “dodged the bullet” because a large portion of the greater metropolitan area is below sea level. The true threat was soon apparent, despite the fact that New Orleans had avoided a direct hit from the storm’s powerful winds. 10 inches (25 cm) of rain and Katrina’s storm surge completely overwhelmed the levee system that controlled the waters of Lake Pontchartrain and Lake Borgne.

The storm surge completely overtopped some levees protecting the Industrial Canal, the 17th Street Canal, and other areas, while others were breached after these structures completely collapsed due to the buildup of water pressure behind them. The first area of the city to flood was the region east of the Industrial Canal; by the afternoon of August 29, about 20% of the city was under water.

Tens of thousands of people remained in New Orleans as of August 31 when the first wave of evacuees arrived at the Red Cross shelter at the Houston Astrodome, about 350 miles (560 km) away. By September 1 an estimated 30,000 people had gathered at the convention centre and another 25,000 had taken refuge under the Superdome’s damaged roof.

Daily temperatures reached 90 °F (32 °C), food shortages quickly became a problem, and potable water became scarce. A public health emergency was brought on by the lack of fundamental sanitation and the pervasive floodwaters, which were brimming with bacteria.