How much time can lobsters survive without water?

In the benthic zone of the ocean, lobsters are omnivorous species of large marine crustaceans that settle in fissures or holes of the seafloor. They have long bodies with hard shells covering them.

Their blood is blue because hemocyanin is present in it. They have a maximum length of fifty centimetres and a maximum weight of four pounds. They have a long lifespan and, as long as they are kept in seawater, can live for 100 years. What happens, though, if they stay on land? 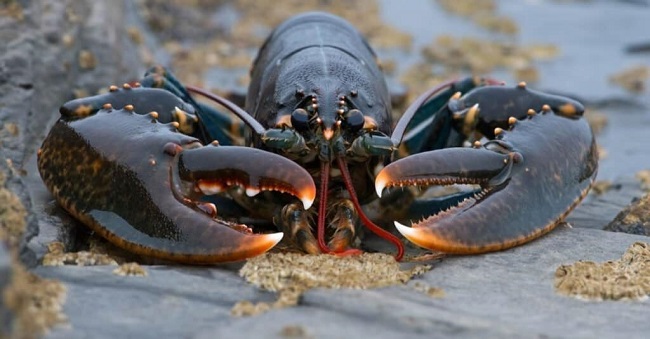 Although they can live for a century, lobsters can pass away quickly when they are not in water. After being removed from the water, a lobster can only survive for about 36 hours if kept in a cool, humid environment. Gills are used by lobsters to breathe, so keeping them moist is necessary to prevent them from collapsing.

Knowing that proper handling and storage of lobster are crucial to keeping it fresh is important because lobsters perish quickly when taken out of the water. The best course of action is still to cook lobsters right away. However, it’s critical to understand how to store them when a delay in cooking is unavoidable.

Here are some helpful hints for storing and maintaining the freshness of lobster:

Which Method of Cooking Lobster Dead or Alive Works Best?

Even after they pass away, lobsters can still be cooked; some are even offered frozen in grocery stores. Even so, it is still preferable to cook the food right away or while it is still alive. Because the bacteria in their flesh doubles quickly when they die, lobsters can expire quickly.

Never try to eat or cook lobster that has been dead for more than 24 hours or that has the consistency of cottage cheese. When fresh, lobster smells faintly of the sea; as it rots, the smell becomes foul and pungent. Additionally, the lobster’s tail can indicate whether it is still good or bad; typically, when it is in good condition, the tail curls under the body; if not, it’s time to throw it away.

Despite having a very long lifespan, lobsters are not immortal. Though they will pass away eventually, why do lobsters live for so long? That is based on science. Some of the explanations are as follows:

Lobsters moult as they grow, but when they get older, they stop, which is a sign that their time is running out. Every creature needs energy to moult, including lobsters, who as they get older become exhausted during the process.

They will stop moulting as a result of exhaustion, and when this happens, their shells will deteriorate and break, leaving them more susceptible to illnesses and predators. Eventually, they will die.

How Long does a Lobster Live in the Wild as Opposed to a Zoo?

This large clawed crustacean creature is native to the salty waters of the ocean, but what if lobsters were kept in zoos?

How much longer will they live? Although lobsters live a very long time in the ocean, their lifespan is unquestionably shorter when they are kept in zoos. It is still unknown how long a lobster kept as a pet or in a zoo will live. The way they are cared for will determine how long they live.

When placing them in a zoo, keep the following in mind:

What are the Lobster Innate Predators?

Despite their cannibalistic tendencies, lobsters have natural predators in the wild. Numerous fish and animals prey on lobsters, including Atlantic codfish, haddock, seals, eels, wolffish, and other lobsters. Humans, however, are lobsters’ greatest predator. For a very long time, we have been catching lobster and using them as a luxury food.