Manchester United scored in stoppage time to defeat Villarreal in a thrilling Champions League Group F match thanks to a goal from Cristiano Ronaldo. While Villarreal prevailed in last year’s Europa League final on penalties, it was Ronaldo who stole the show this time around with a game-winning goal in extra time. In a show of jubilation, the Portuguese superstar went to the corner, stripped off his shirt, and tossed it high into the air. 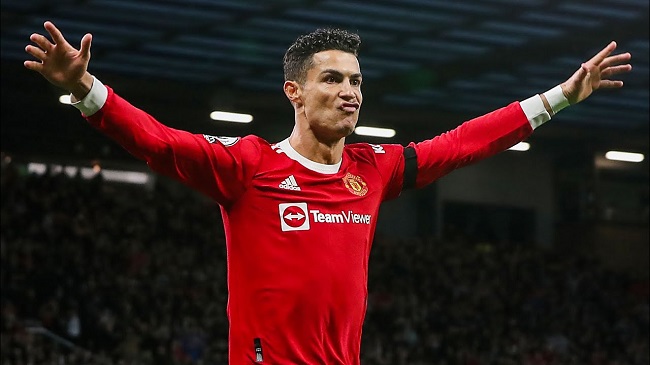 United had just put together another lacklustre effort, this time against Villarreal, and were on the verge of losing their third consecutive game until Ronaldo stepped in. Expertly converting Jesse Lingard’s assist. A draw looked certain until Ronaldo scored in stoppage time to give United the win.

Ronaldo’s shot from a tight angle beat the helpless Villarreal goalkeeper thanks to a deflection. Previously, United had fallen down as Paco Alcacer scored for the other team in the 53rd minute. However, United were able to tie the game thanks to an outstanding volley by Alex Telles.

Ronaldo Scores a Goal, And you can Watch it Here:

David de Gea, United’s goalkeeper, had already produced several great save earlier in the game, denying Arnaut Danjuma, Yeremi Pino, and Paco Alcacer. Ole Gunnar Solskjaer, United’s manager, remarked after the game, “That’s what happens at Old Trafford, we had to throw caution to the wind and got lucky in the end.”

United’s 2-1 win over Villarreal got their Champions League campaign back on track after they dropped their opener to BSC Young Boys. Villarreal, however, has only one point in Group F, putting them last.

“Frustration has set in for us. We should have seen out the game, but it was already over. As a group, we need to use this as a learning experience. Before that, we had been flawless, scoring first and beating Man United at Old Trafford “As a defender for Villarreal, Pau Torres was understandably disheartened by the final score.

On Wednesday night, Ronaldo made his 178th appearance in Champions League play, setting a new record for most appearances in the competition. He surpassed Iker Casillas, the previous record holder, by one.