The debacle in the Champions League final was the result of a series of interconnected organisational errors. But the complex relationship that France as a society has with football fans — one of scorn, curiosity, and eventually terror — is the root cause of the events that took place in the hours before the game and late into Saturday night in the areas around the Stade de France.

When compared to the rest of Europe, France’s football fan culture is young. The scene emerged in the mid-1980s, drawing inspiration from Italy and the United Kingdom; in the 1990s, however, fan collectives began to forge their own unique character. Since its passage in 1993, the first piece of football-related security law has set the tone for all official policies regarding fans: they are a nuisance and must be addressed as such. 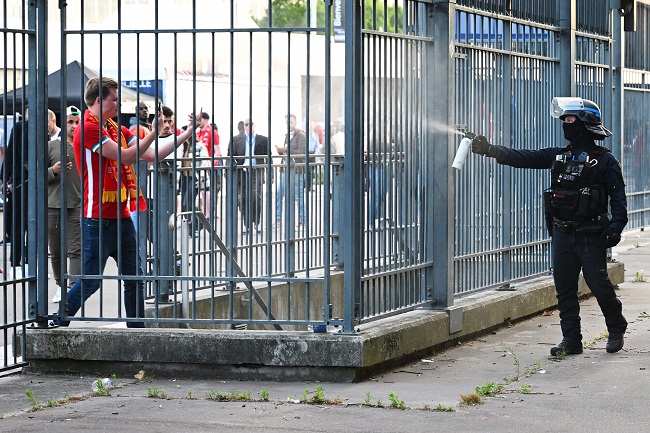 When compared to other European countries, France’s strategy for protecting football matches is unusual. It is dated, rarely supported by evidence, and founded on the false premise that supporters must be managed, disciplined, and governed. Much of this is unique to football, however it does stem from an antiquated method of crowd control in general.

France is the only European country to have judicial, administrative, and club-issued prohibitions on entering stadiums. Moreover, we are one of the only countries to impose significant restrictions on the freedom of movement of supporters, who are frequently prevented from travelling even within the country.

What does this have to do with the Liverpool supporters that flew to France? By imposing such severe limits on supporters’ freedom of movement, government officials are effectively admitting that they have failed to protect their constitutional rights.

Far-fetched excuses, like an annual farming fair or an international kite festival, are commonly used to explain away the insufficient number of law enforcement personnel. At an earlier Europa Conference League game this season, Spurs fans were not allowed to enter the city centre of Rennes, making it technically illegal for them to check into the hotels they had previously rented. Because of the administrative travel prohibition, away fans missed out on 63 home games this season.

When you consider that the government prevents Mulhouse fans from travelling to Grenoble, it’s a little hard to understand why the country would ever want to host international football games. And on Saturday, this mystery was solved right before our eyes in Saint-Denis.

There are two major issues with the way the French have handled the Champions League final that have negatively impacted Liverpool fans. First, public officials’ haughtiness and self-importance, which caused them to make the same mistakes again and over again.

The mobility challenges near the Stade de France, the excessive use of force by the police, the crowded stadium gates, the petty crime on the access routes, and the tickets touts and other fraudulent tickets around major finals were entirely expected when viewed individually. The organisers and government bodies were charged with mitigating all of these dangers, which were all well-documented. They were, instead, generally disregarded.

Two, supporters of Liverpool have received essentially the same treatment as their French counterparts. They have been seen as a threat in the same way that any other team would be for any other game in France; there was no special treatment here, no unusual conditions for the final. And it could be even worse because governmental officials evaluated the potential threat by relying on stereotypes about English football fans from the 1970s.

They started with the wrong conclusion, portraying the fans as a threat to manage and an enemy to squash, rather than establishing a proper evidence-based approach that would have revealed that Liverpool and Madrid fans are among the most cordial in Europe.

This explains why there was such a heavy police presence near the Stade de France. It appeared that the police were dressing to impress, with riot units and police trucks placed in highly conspicuous locations around the stadium. The Liverpool supporters were not treated like guests but rather like intruders. They were naturally dangerous and needed to know who was in command.